Now that Google+ Photos is discontinued, Google Apps admins received a message which informs them that Google Hangouts will only use Picasa Web Albums for photo sharing. 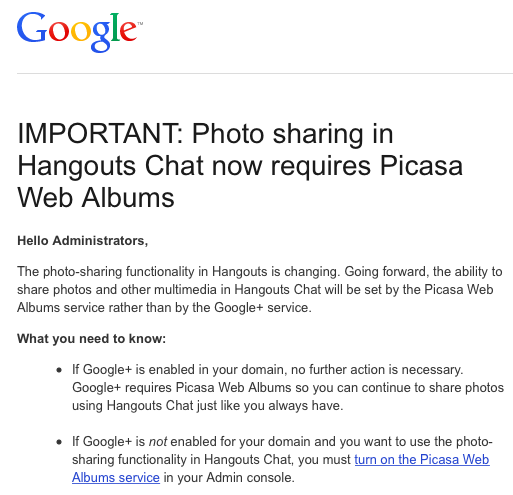 This change also affects regular Google users, since photos shared using Hangouts aren’t added to Google Photos and you’ll only find them in Picasa Web Albums when Google+ Photos will shut down. The same thing will happen with Blogger photos.

Picasa Web Albums and Google+ Photos served as a central hub for almost all the photos uploaded using Google services. This was great, since you could find all your photos in one place, but it also cluttered Picasa Web and Google+ Photos with albums automatically generated by Blogger, Google Hangouts and other services.

It looks like Picasa Web Albums is here to stay, at least for now.

Offering the most effective, creative and dynamic digital and online advertising using various types of social media platforms and cutting edge video materials, techniques and strategies. We are taking digital marketing and social marketing on to the next level through innovations.